Krimml Worlds of Water are open again on 1st of May 2020.

We are looking forward to seeing you next year! 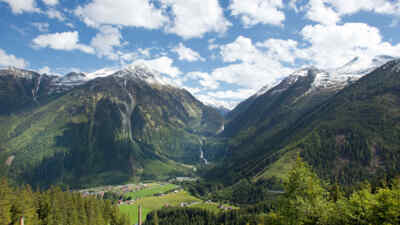 History of the Krimml Waterfalls

Let’s turn back the wheel of time really far to before the formation of the Central Alps 30 million years ago. The collision of the African and the Eurasian plate releases unbelievable powers, gradually unfolding and pushing up numerous layers lying on top of each another that had formed over the course of several eras. That’s how the so-called “Hohe Tauern window” developed, which allows geologists to read the development of the Alps and its composition by examining its various layers – comparable to a cut through the mountain. This special geological area also contains the brim, which has been hurling down from the Krimmler Ache to the valley as the Krimml Waterfalls to this day. 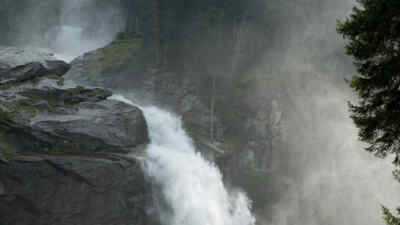 Until the end of the 18th century, Krimml had been a small, negligible village at the “end of the world”. Tyrol could only be accessed from Krimml via the strenuous Krimmler Tauern. The path across the mountain pass had been known for millennia for various reasons – after all, it was the shortest way from Salzburg to Tyrol for sumpters and merchants. The Krimml Waterfalls, however, were mostly unnoticed until the evolving nature enthusiasm of Romanticism discovered their charm. The waterfall, village and alpine surroundings formed the ideal backdrop for driving painters as nature, which so far had only been in the background of paintings and pictures or served as a secondary topic, became the focus of artistic interests for the very first time for Romanticism painters.

Alpine enthusiasm of Romanticism and first tourism in Krimml

The Krimml Waterfalls were already widely known among mountain-enthusiastic romanticists and alpinists at the turn of the 19th century. Even “His Serene, Imperial Highness” archduke John visited the “famous Krimml Waterfalls” in 1829. The first stair trail to the lowest of the three waterfalls was installed in 1842. Wealthy tourists that had covered the drive by horse-drawn carriage and Romantic painters could observe and marvel at the waterfall protected from its spray by a shelter. Travelling to the imposing waterfalls was expensive and limited to a small number of people. Everyone else had to make do with pictures and descriptions.

The railway: development of the Krimml Waterfalls for numerous visitors

For a long time, Mittersill had been the final stop for rail travellers. The Pinzgaubahn was opened at the end of the 19th century, allowing guests to travel the remaining 32 km to Krimml. Rail accessibility, the creation of a hiking trail along the Krimml Waterfalls by the Austrian Alpine Association and the construction of inns and hotels led to a quick increase in tourism around Europe’s highest waterfalls. The electronics business’s attempt to get its hands on the waterfalls was successfully fended off, however. The Krimmler Achental and the waterfalls were put under protection in 1958; as part of the High Tauern National Park, the waterfalls have been completely untouchable since 1984.

You’d like to visit the Krimml Waterfalls yourself? Find out more now about the quickest way to get there with the route planner  and read everything important about the prices and opening hours  of the WasserWelten Krimml!